We’ve talked extensively about Superman, Batman, Captain Marvel, and the Justice League, so let’s now turn our attention to that distaff cornerstone of the DC Universe, Wonder Woman. Do get comfortable, shall we?

Most people know the basics, usually from Superfriends or from the 70s Lynda Carter jigglefest. 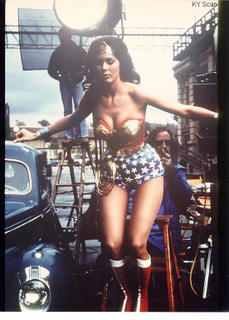 Amazon princess. Bullet-deflecting bracelets. The invisible jet, thankfully long since retconned out of existence. But the one that fascinates people the most is the magic lasso, which she uses to tie people up and force them to tell the truth. It’s always been one of those things, like Batman’s relationship with Robin, that strikes folk as slightly suspect, an unintentionally kinky subtext from a more innocent time.

Guess what? It ain’t that unintentional. 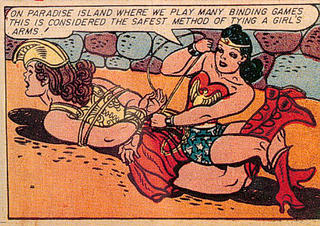 (and thanks to Scans Daily for turning up that picture)

Wonder Woman first appeared in 1941, created by psychologist William Moulton Marston. Marston had previously distinguished himself as the inventor of the polygraph. He also had a lot of ideas that many would consider…off, or at least unusual. He was polyamorous, committed both to his wife and a former student, and raising children by each, the four children and three parents living together, apparently all okay with the setup.

He was a proponent of a theory about female power, based on willful submission to loving authority, versus what he considered anarchic and violent male power. As he wrote in a 1943 article:

“Not even girls want to be girls so long as our feminine archetype lacks force, strength, and power... The obvious remedy is to create a feminine character with all the strength of Superman plus all the allure of a good and beautiful woman.”

And thus was born…Suprema, the Wonder Woman.

The “Suprema” part was cut, obviously.

Marston wrote the first six years worth of Wonder Woman stories under the pseudonym Charles Moulton. Many of the stories were a platform for his philosophies of submission to loving authority, best expressed in the following quote: 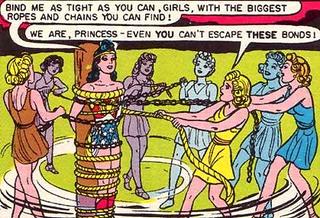 I’m a bit surprised that this early philosophy hasn’t led to a Gor-like following (at least not one directly based on Wonder Woman—there are tons of men submissive to powerful females). Maybe this will be a part of the upcoming Wonder Woman movie, her first big-screen appearance, to be written and directed by Joss Whedon, who knows a thing or two about strong female characters.

So, now we know that the kinkiness in Wonder Woman was entirely intentional. 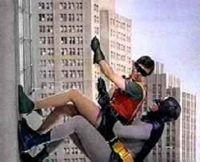 Big ups to Wikipedia, from which vast wodges of this piece were shamelessly cribbed.

Comments:
HEHEHE batman is funny hehehe., I want to know more about the movie.