So that's it for me at the Toolatorium. It was weird closing on my last day, since I had to say my goodbyes to the rest of the department early on, then spend the rest of the shift alone. The day ended on a fitting note, however, a sort of summation of the Tuul Haus experience. Being almost entirely devoid of customers, and on Christmas Eve Eve, the manager told us to do our closing routines early, so he could let us out right at closing. Hey, no problem; all I was doing was responding to rumors as news of my departure continued to spread (apparently, I was the only exciting thing going on there). Yes, I'm moving to Seattle. Yes, I'm working there. No, I probably won't get to meet Bill. Yes, I'll have a chip implanted in my buttocks that will automatically open doors and turn on lights.

So, ten o'clock, the only customer left in the store is a woman drifting back and forth past the endcaps. We've had the fifteen-minute announcement, the ten-minute, the five-minute, and finally, the "The time is ten o'clock, and Tool Seraglio is now closed." Naturally, that's when the woman turns and begins asking me, in a language only tangentially related to english, everything there is to know about Shop-Vacs.

I was beginning to wonder if I was getting secret-shopped; I could just picture the suits back in Montreal going, "let's make sure that this guy on his last shift, on the night before Christmas Eve, isn't gonna start slacking." But that's just, y'know, self-important me. If any of the suits even spared me a single thought, it was probably, "good riddance, now you can't scare the customers any more."

So, despite getting out late (by which I mean, less early), it was a fitting end to my career as tool monkey. There have been some jobs that, when I left, it was sheer relief. Yes, I sorta missed the gang at the pitcher-frame place, but only in the way that, say, Hawkeye missed Charles after Korea, if you catch my drift. This place, though, treated its employees with a surprising amount of respect, and counted on us to be able to take initiative and make our own decisions. Whenever I leave a job for greener pastures, I always say I'll come back and visit. This place, I actually will. 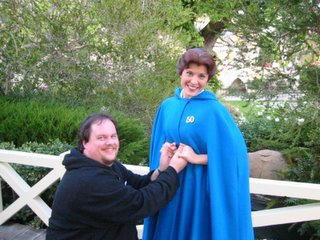 
So, should I keep posting the You Are Here scripts? Or has anyone with any interest already read them?

So, we all know what a shite state Star Trek is in these days; after Nemesis, the movies are essentially dead, there are no new videogames (and in fact Activision sued Paramount for not keeping the franchise popular enough to sustain the games) and Enterprise...oy...was finally put out of its misery after five seasons (the first series since the original to go less than seven) with a finale that was essentially a big Mary Sue story.

(If you don't know what a "Mary Sue story" is, look it up. I'm gonna dig deeply into my Trek-geek adolescence here, when Star Wars was over, Babylon 5 was still ten years away, and Trek was the only ongoing SF franchise.

So there's no more movies, games, or shows, and the only books worth reading are the increasingly-infrequent "New Frontier" series by Peter David (who should really be overseeing the whole Trek shebang, but that's a different article). Is it dead, Jim? How's a frustrated Trekkie (fuck your yankee "trekker," thankyewverymuch) supposed to get his fix?

Star Trek: New Voyages is, quite simply, a continuation of the original series. Essentially, it's years four and five of the Enterprise's five-year mission, the stories that would have been told if the show hadn't been axed. This is nothing new; hell, the animated series from 1972 covered a lot of the same ground. So what sets New Voyages apart from the glut of fanfilms? Well, first, let's look at some of the crew. Executive producer: Jack Marshall. Series producer: Max Rem. Consulting producer: Eugene Roddenberry Jr.

That's right. The son of the Great Bird Of The Galaxy is on board. How's that for a ringing endorsement?

And the stakes are being raised with the third episode, "To Serve All My Days," set to be released next summer. That one is written by Dorothy Fontana, an actual writer for the actual original series, with such memorable episodes as "Journey to Babel," and a personal favorite of mine, "Tomorrow Is Yesterday." She wrote "The Naked Now" for Next Generation, giving us Data's classic line, "I am fully functional...I am programmed in a variety of techniques."

So we've got Gene Roddenberry's son, a writer from the original series...what else would legitimize this? How about Chekov?

Yes, Walter Koenig will be appearing in the third episode, returning to the role of Chekov, in a way that will be sure to set online Trek fandom (a subculture I just can't get into) ablaze with controversy.

Now, I know that simply having the endorsement of Gene Roddenberry Jr. does not guarantee a quality show. The important question is: how is it? Well, it's...pretty good. Pretty awesome in places, and in a few places downright fantastic.

The producers wisely take the attitude that, rather than try to emulate the original series actors, the cast should consider their characters icons, like Hamlet or Sherlock Holmes, and reinterpret them accordingly. James Cawley, an Elvis impersonator who built a replica Enterprise bridge in his barn, has the requisite swagger for Kirk, without copying too many of Shatner's mannerisms--and he does it all with a killer pompadour.

The supporting cast seem to be having a great time reinventing their characters; I'm particularly drawn to the gorgeous Julienne Irons as Uhura, and not just because of her Starfleet miniskirt.

For me, the only sour note is Jeffery Quinn as Spock; Quinn is 22 and works in a video-game store, and clearly wants nothing more than to be Nimoy when he grows up. Still, his heart is in the right place, and one can hope that he'll make it his own as he gets older.

While the pilot, "Come What May," is enjoyable, I think the show started to hit its stride with the second episode, In Harm's Way. A strong story, lots of surprising plot twists, a good sense of Trek history, and references to about half a dozen other classic episodes, tied together in a neat package. My only complaint about the episode is with the Enterprise itself; while the original series was limited to modelwork (which they did pretty well), the CG effects in this one lead to the Enterprise flitting around like a hummingbird in space, pulling off some pretty unlikely maneuvers.

Still, until Paramount pulls their head out of their Jeffries Tube, it's currently the best way to get your Trek fix, and to remind yourself of exactly why Trek once mattered. The show is featured in the current issue of Wired, so now's a perfect time to *sigh* beam aboard, to get ready for Episode 3.

Okay, I know I'm a Rocky Horror curmudgeon, with all my "in my day, we didn't have your fancy commemmorative edition DVDs and theatrical prints with "Superheroes," we watched bootleg tapes from Japan and we liked it, goddammit!" I accept that. But this is just unacceptable no matter how you slice it.

So if you haven't heard, or were wondering about my girlish screams of semi-orgasmic delight, I'll soon be joining Chris' team at the Very Big Corporation Of America. Geez, what kind of country is this where you can't visit someone for a weekend without being offered a job?

I kid, of course. This is without a doubt the biggest, most life-changing thing that's happened to me since, well, ever. I gave my notice at the Tool Corral today, so as Paul Frees likes to remind us, there's no turning back now.

I'm really making an effort to not think of this as the happy fairy magic that will instantly make my life perfect. As the tall bald Texas guy always says, "The onlah one who can change yew, IS YEW!" The fact is, I haven't been handed a panacea, I've been offered an opportunity to get my shit together, and now it's down to me to keep it together. My philosophy is that there's nothing wrong with being offered a helping hand, but when you are, it's your responsibility to use that to pull yourself up.

I get to come home. I get to live in a city with more than two movie theaters. I get to rent at Scarecrow Video. I get to eat teriyaki. I get to have TiVo. When I go to KFC I get to have mashed potatoes. And for the woman who's believed in me for the last five years, through getting fired from a shite casino job, through sitting on my ass surfing 4chan while I was legally unable to work, through self-image crises so regular you could set your watch to them, I get to live up to the potential she saw in me.


According to this article, several rival CG animation studios are cropping up to challenge Pixar's dominance of the field. This is in addition to Dreamworks (Shrek) and Blue Sky (Ice Age), not to mention Der Maus itself. Disney's abandoning its roots aside, I think this is a good thing; healthy competition leads to faster innovation, and ultimately better output.

Even better, who's the creative director at Orphanage Animation Studios? Genndy Tartakovsky, dude. While I still wish for more Samurai Jack, I can't wait to see what this guy does with a feature budget.