Sarah Michelle Gellar is appearing in the movie adaptation of the game American McGee's Alice. I was livid, until I found out she's not playing Alice, but rather the red queen.

Not the movie Alice, just a bit of fun. I always had a bit of a thing for Alice.

On The Town is done. Back to the job search.

Can I go back to On The Town? At least with that I didn't get the feeling that I was howling into the void, sending out five or six resumes a week and not getting so much as an email telling me to fuck off. And that's just the film and video applications--it's even more disheartening to not get a call from a video store RIGHT ACROSS THE STREET.

So, those of you with successful jobs, any advice? Anything I should be doing differently, apart from, y'know, being someone else?


So, thanks to the apparently fine work I did on Guys and Dolls, I got asked to stage manage another musical, On The Town.

This time it's for a company called Applause Musical Society, which has a fun idea: they take old and lesser-known musicals, that haven't been done in a while (and have never been done in Vancouver) and they do them as sort of a "readers theater" version: one week of rehearsals, minimal costumes, props and blocking, and the cast carry their scripts onstage in Applause's signature black binders. It's a fun idea, and one that I thought would be perfect for my first time stage managing. That, of course, was before I realized that the director and AD would be completely ignoring the "minimal costumes props and blocking" rule: the production, which opened Wednesday for a five-day run, features two long dance breaks, and the prop list includes a pair of bongo drums, a lot of Photoshopped signage, a banana, and a dinosaur head. Seriously.

There seems to be a pattern emerging in my theater work in Vancouver: I get thrown into a position I've never done before, on a musical set in New York in the mid-20th century, and some stage business has to be worked out involving getting a banana peel offstage. Oh, and just like G+D, On The Town has been parodied on the Simpsons:

Betcha didn't know that's where that was from.


Okay, five things you need to know about Doctor Who:

2. To further confuse the issue, the main character is not called "Doctor Who," he's simply "The Doctor." The Doctor is from a civilization known as "The Time Lords" from the technologically advanced planet Gallifrey. Gallifreyans have two hearts, and are able to regenerate at will into entirely new bodies, a plot device introduced when the original star, William Hartnell, was getting too old to continue in the role. The Doctor has always traveled with one or two human companions, usually from earth, usually atttractive females to keep the men's attention. In the 1970s, one of the Doctor's companions was a female Time Lord named Romanadvoratrelundar. The sexual tension between the Doctor and his female companions has always been both highly pronounced, and completely unacknowledged; the sparks between the Doctor and Sarah Jane Smith (with fellow companion Harry Sullivan forming a romantic triangle) could have rendered nuclear energy obsolete. 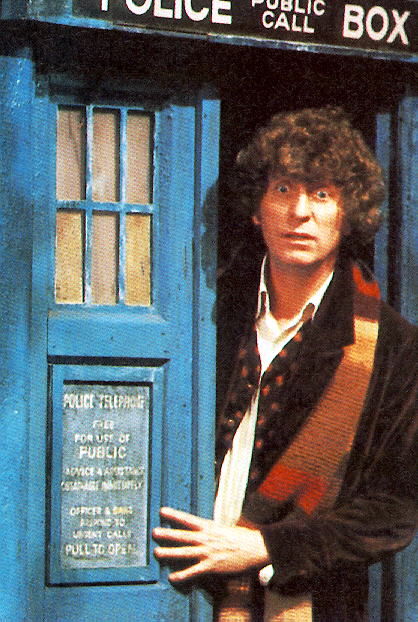 3. The Doctor travels through time and space in a vessel called The Tardis, which is an acronym for Time And Relative Dimensions In Space.

The interior of the Tardis is vast, and able to reconfigure both its archtecture (rooms can move around without warning, or disappear completely) and it's interior appearance, allowing the Tardis interior sets to update every few years. Each Tardis is equipped with a "Chameleon Circuit," which allows it to change its outer appearance to blend in with the time and place it has materialized. But the Chameleon Circuit on the Doctor's Tardis got stuck in the early 1960s, locking it in the shape of a British emergency police call box.

4. The Doctor has had many recurring enemies over the years, but the best-known are, by far, the Daleks. 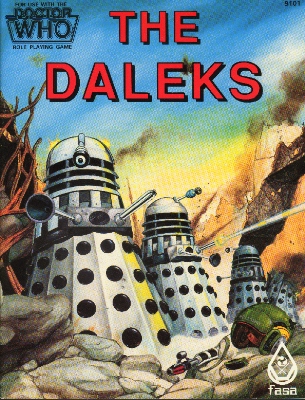 While the show had originally been conceived as a series of educational historical adventures, writer Terry Nation created the Daleks in the second storyline, leading to a national craze, with British kids going Dalek-mad the way American kids went Star Wars-crazy a decade later. Despite their appearance, the Daleks are not robots; they were from a humanoid civilization that mutated as the result of a thousand-year atomic war, and must live inside the motorized shells. The Daleks consider themselves to have evolved past human concepts like emotion, and with their legendary battle cry of "EXTERMINATE!" they seek to wipe out all other life forms in the universe.

5. Doctor Who is the world's longest-running science fiction franchise, predating even Star Trek. The show premiered in 1963 and ran, with only a few brief gaps, until 1990. Even then, it was not considered cancelled by the BBC, only on extended hiatus. In the intervening years, there have been dozens of spinoff radio plays (featuring the actual TV stars) and novels. There was an attempt at a TV revival in 1996, produced by the BBC and Fox, which was enjoyable but flawed. The series has finally returned to the BBC this year, in a new series starring Christopher Eccleston as the Doctor, and pop star Billie Piper as his new companion, Rose. And I'm pleased to report it's amazing.

The show has abandoned the four-part story arcs of the past, in favor of 45-minute episodes that can better be sold into international syndication. The show succeeds because no matter how far-out the science fiction elements get, each story is grounded in the characters, and beautifully anchored by Eccleston, with his slightly manic air of intellectual superiority. Unlike, say, Star Trek, the new series incorporates the novels into its continuity, which means that both Gallifrey and the Daleks were wiped from existence in an apocalyptic time war, leaving the Doctor as the last surviving Time Lord. Unlike previous incarnations, the sexual tension between the 900 year-old Doctor and the 19 year-old Rose is front and center, adding a layer of depth to the stories.

The new series (which you can call season 1, or season 27, depending on your point of view) airs on CBC, which should be available on your cable system, or you can download them via bittorrent at www.demonoid.com or www.uknova.com Start with the first episode, "Rose," and watch the thirteen episodes in order, and see if you can spot the subtle plot elements building up to this weeks season finale.


And while we're on the subject, why not check out some Gorillaz fan videos?

These are surprisingly well-done, and they bring up an interesting question: Even though Gorillaz are the creation of Damon Albarn and Jamie Hewlett, they're cartoons, so what's to stop them from becoming the first "open source" band? Discuss.

It's the music that we choose

Finally, someone let them out their cage


So, uh...
Yeah?
You remember when Tim Burton announced that he wasn't going to direct a third Batman movie?
I think so...there was all sorts of speculation on who would take over...
And then Joel Schumacher ended up doing it.
Oh god, now I remember. Why would you bring up such a painful memory?
Well...

If you lived in Seattle in 1996, you probably remember the incident: first came the reports that a section of downtown had been closed and a bomb-sniffing robot had been sent in to defuse a potential bomb. When the full story came out, it was one of the most idiotic episodes in Seattle history.

It started in 1993, when a group of guerilla artists led by a guy named Jason Sprinkle attached a ball and chain to the ankle of the "Hammering Man" statue at the Seattle Art Museum. SAM officials showed their commitment to the arts by refusing to refer to the artists as artists, instead reaching into their asses and pulling out the phrase "Fabricators Of The Attachment."

Three years later the same group, now proudly claiming SAM's sobriquet for them as their own, built a giant heart with a dagger through it, leaving it in the back of a parked truck downtown to protest the city's reopening of Pine street to traffic. A nice, fun, harmless jape, right?

Well, first of all, thanks to the Oklahoma City bombing the year before, people tended to get paranoid about unattended trucks. Then there was the fact that this particular truck was covered in graffiti, including the phrase "Eastlake Carpentry rules (the bomb!)". Ignoring the "Eastlake," the "Carpentry," the "rules," and the parentheses and the "the," someone noticed the word "bomb" and pretty soon the bomb-bot was on the way.

I'm going to reiterate what I said at the time: in no way am I saying that the decision to park the truck there was a good one. Their big mistake was in assuming that people could be rational and intelligent.

Having said that, however, the reactions of pretty much everyone involved were uniformly disgraceful. The local news couldn't be arsed to do even the most basic fact-checking, referring to Sprinkle's group as "The Fabricators Of America." The Seattle PD arrested Jason Sprinkle, not on the reasonably valid charge of disturbing the peace, or even illegally parking, but on, I shit you not, "intimidation with an explosive device."

That was the last I, at least, heard of Jason Sprinkle, until Slumberland had a link to his
obituary.

Go read it. Find out how he got fucked over by the whole situation. But take with a grain of salt the phrase, "cooler heads ultimately prevailed." If that had been the case, we wouldn't have spent the next year reading about the bomb squad being called out to investigate a "suspicious package" every time someone accidentally left their backpack at a bus stop. And the P-I wouldn't have published so many breathless editorials about how Sprinkle left a nondescript truck with "BOMB" painted on the side in big letters. I'd like to think that everyone who contributed to Sprinkle's breakdown is feeling just a little bit guilty right now, but I'm not that naive.

Shit, I'm all pissed off now. Don't get me started about T.J. Williamson.

The Disney sites keep going on about how fun and addictive this all is. If the damn thing didn't make my entire computer slow down I might spend more time there.