I've always had a soft spot for the Fantastic Four, and since the movie is currently filming in Vancouver, I've been watching its progress with interest. Now comes this report from Cinescape that some new footage is being shot to better showcase Reed Richards' stretching power, apparently to live up to the standard set by Elastigirl in The Incredibles. And that's just fine with me.

You can see some early footage from the movie here. They seem to have done a decent job updating the origin, though not as inventively (and consistently with FF lore) as Brian Michael Bendis in the kickass Ultimate Fantastic Four. Though I don't see how any movie could capture the mad genius ideas that would regularly flow from Jack Kirby's pen.

Christmas has been saved!

Go listen to this right now. Your soul will rejoice with the glorious, heaven-sent majesty of this recording. Join me in the comments for more.

"Bull semen splashes up and forms itself into the McDonald's golden arches as the words "Made from 100 per cent beef" appear beneath them. All this within an ad break during your favourite TV soap." 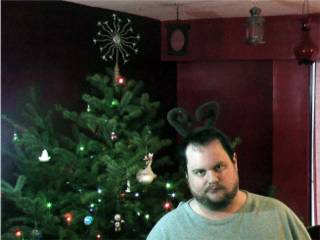 
Googlewhacking is, apparently, entering two unrelated words into Google in hopes of getting exactly ONE result. I must now try this.

Incidentally, you know how I occasionally post a link, and tell you not to click it? Well, this will be the last time I do that, because this is...I'm sorry, there are no words for the horrible, soul-crushing wrongness. I urge--no, I BEG you, don't click the link.

"Hello to...well, just myself, at the moment.

It's currently December 19, in the year two-oh-oh-three, as Gordy would say, I'm bored waiting for my sister-in-law to take me to use her employee discount for Christmas shopping, and I decided to finally get around to starting my blog. I may stick with this thing, I may not. Maybe after the new year.

Notes to self: only four more You Are Heres. You can do it. Also, Outcasts, Sleeper Agents, Mr. Infinity. Just fucking write. It's not like you're doing anything else with your days."

The Klubhaus has been open for a year today! Break out the cigars!

One of my favorite bittorrent sites falls victim to Valenti's mafia. Urge to kill, rising...


I don't want to live in the same world as this guy. So you know what you have to do now. 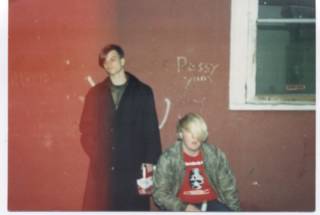 Trying to look like a new wave album cover. Note "Pussy Yum" above Reinhard's head. He fixated on this graffito to an unnatural degree. 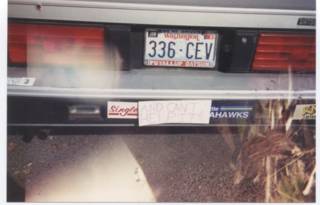 Originally "...and loving it!" 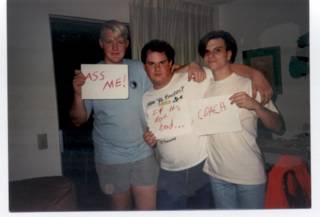 What is Britney Spears trying to tell us?

Since I know you live and die by Titney's actions.

They STILL haven't found it.

But this one you can look at.

Go ahead, it's okay. Would I lie to you?

And seriously, don't look at this, either.

What, you didn't learn from the last one?

Don't look at this.

You'll only have yourself to blame.