Okay, I'm not much into the whole rah-rah Amurca thing, but some things are just too good to pass up. 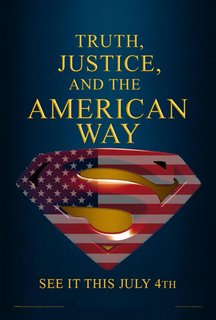 
Picture it. PICTURE IT.

Don't like the taste of maple? How about apple?
Copyright 2004 Rich Bowen

Look! Up on Niagara Falls!

A new approach to movie marketing: This is happening at Niagara Falls, Pittsburgh, Philadelphia, and other cities, but sadly, not Seattle.


"On our first backstage stop, a utility area behind Pirates of the Caribbean, Matthew points out a rubbish compactor the size of a four-unit apartment building. Remarkably, before the garbage is sucked here from around the park by a Swiss-built network of pneumatic tubes, it's sorted by hand to pull out recyclables and all the wallets and cameras people toss by accident. The combustibles are burned to generate a third of Disney's electricity."

Okay, we so gotta do one of these tours.


Last year’s post about 5 things you need to know about Doctor Who seemed to go over fairly well, so I’m gonna do something similar in anticipation of Superman Returns (June 28—IN IMAX!), except this time I’m assuming you know the basics; Clark Kent, Lois Lane, the Daily Planet and whathaveya. So what I’m gonna do this time, I’m gonna hit you with Five Things You May Not Have Known About Superman.

1. Like a modern mythology, the details of Superman’s reality can change at the whims of the storyteller. Most recently, elements of Smallville and the Christopher Reeve films have been creeping in; suddenly, the Fortress Of Solitude is made of crystal, and the S emblem is a Kryptonian family crest, rather than just something Ma Kent thought would look nice. This is par for the course these days—look at how the X-Men adopted black leather after the success of the movie—but Superman blazed the trail.

Did you know that when Superman premiered in 1938, Clark Kent was a reporter for the Daily Star? His editor was George Taylor. More surprisingly, he couldn’t fly, only leap an eighth of a mile. There was no Kryptonite, hell, Krypton didn’t even have a name.

The instant success of Superman naturally led to appearances in other media, which led to the first major changes to the mythos. Nowadays, Superman flying seems perfectly natural, an important part of who he is. But it was the early 40s cartoons by the Fleischer studios (they’re public domain—grab ‘em on the Internet Archive and enjoy) that gave Superman the power of flight, after the leaping looked clumsy in early pencil tests.

The cartoons were an offshoot of the highly successful radio series, even featuring series star Bud Collyer. It was the radio series that had the biggest impact on the comics, changing the Star to the Planet, and introducing Perry White AND Jimmy Olson. Though Krypton had already been named in the comics, the radio series was the first appearance of the deadly Kryptonite—more on that later. The entire mythos has been repeatedly overhauled, tweaking details here and there; Krypton went from a vibrant utopia, to a cold world of science-worship, then back to the utopia, and now it’s pretty much like the one we saw in the movies. After the late-90s animated series, Lois Lane has taken to calling Clark “Smallville.” Time will tell what they take from Superman Returns.

2. Modern Metropolis is portrayed more or less as New York City; the first two movies were filmed there, and Tom De Haven’s 2005 novel It’s Superman drops the whole pretense and calls it New York. But the city was originally modeled on Cleveland, home of Jerry Siegel and Joe Shuster, with a soupcon of Joe Shuster’s birthplace, Toronto.

Most portrayals depict Metropolis as your basic art-deco, well, metropolis. There was a brief period in 2000 where the whole city was upgraded by Brainiac, becoming a high-tech futuristic “city of tomorrow,” but like most changes, this was quietly dropped.

The exact location of Metropolis remains a mystery; generally it’s portrayed as somewhere on the east coast. Some portrayals put it within a couple hours of Smallville, making it somewhere in Kansas. And while older comics had it set far away from Batman’s home turf of Gotham City, it’s now just over the “Gothamboro” bridge, making crossovers that much easier. One guidebook for the DC roleplaying game put Metropolis in Delaware, with Gotham in Rhode Island, but again, most people just consider it a fictionalized New York. Since 1972, the city has been known as the “Hometown of Superman,” with a Superman statue, Superman museum, and annual Superman Festival every June. In addition to well-known figures from movies, TV and comics, the festival features a real-live Superman, a real honor for the actors chosen to play the Man of Steel. For this year’s festival, a statue of Lois Lane was added near the Superman statue, in honor of actress Noel Neill’s 85th birthday. 3. We all know about Kryptonite: Green glowing rocks, radioactive chunks of the destroyed Krypton, that are the only thing that can weaken or kill Superman. But at times, there have been nearly a dozen other varieties, each with their own effects.

Blue Kryptonite was the only thing that could kill Bizarro. White Kryptonite kills plant life. Gold Kryptonite leaves a Kryptonian alive, but permanently robs them of their powers.

And then there’s Red Kryptonite.

The effects of Red Kryptonite, see, are unpredictable. It’s perhaps the silliest form of Kryptonite, the one the writers would trot out in the 50s when they wanted to turn Superman into a monkey, or a beatnik, and not enough time had passed for another Mr. Mxyzptlk story.

In the regrettable Superman III, Richard Pryor created an artificial chunk of Red Kryptonite that turned Superman evil. This has carried over to Smallville, with Red K turning up when they need an excuse for Clark to ride a motorcycle and slap Lana around.

By the early 70s, “K-Metal” had grown to be seen as a cheap plot device. So in a memorable series of stories, Superman’s powers were drastically reduced, and nearly all Kryptonite on earth was turned to iron, adding more menace to the few remaining pieces.

Since the big reboot, Green has largely been the only form of Kryptonite, but the other colors have slowly been returning. Can the human-killing Anti-Kryptonite be far off?

4. For a dead planet, there seems to be a lot of remnants of Krypton floating around the universe. Superman has a ton of Kryptonian artifacts in the Fortress of Solitude, including the Phantom Zone Projector, a device that phase-shifts criminals into a ghostly purgatory That weird diamond thingy that General Zod came out of in Superman II was their version of the Phantom Zone.

Argo City was a Kryptonian city that was miraculously flung free of the explosion and floated in space (don’t ask about things like gravity or an atmosphere) until the inhabitants, realizing they were dying, sent a young girl into space to live on earth. That girl was Kara Zor-El, cousin of Kal-El, and better known as Supergirl.

Another city that survived the destruction was Kandor. The former capital of Krypton, the city was shrunk by Brainiac and kept in a bottle in his spaceship. Superman retrieved the city and kept it in the Fortress of Solitude, where it was kept under a simulated red sun. One Kandorian was Mon-El, Superman’s identical cousin. In the late 70s, Superman finally devised a way to restore Kandor to its normal size, and the Kandorians settled on an uninhabited planet and began building New Krypton, offering the promise of an intriguing new setting…but it was never mentioned again, and Kandor has only recently returned after the big reboot.

In fact, most remnants of Krypton are gone now, with DC preferring to play up the tragedy of being The Last Son Of Krypton.

5. Mxyzptlk is pronounced mix-yez-spit-lick. Pronounced backwards (which sends him back to his fifth-dimensional world of Zrff), it’s kltpzyxM, or kul-ti-pi-zix-em.


You might want to go to MSN games today and check out the new Comics To Film Trivia game. 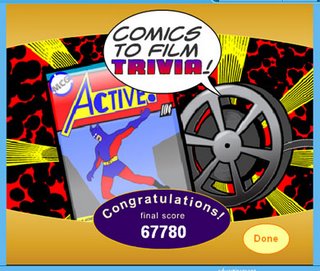 
*sigh* So those of you who've known me for a while may remember that--believe it or not--I am in fact married. I remain so, despite the best efforts of the US Government, who keep reaching into their ass and pulling out new hoops for us to jump through.

I'll try to walk you through the process so far. We began the whole kerfuffle back in January when I moved back to Seattle. There was one form which we'll call Form A, which was simply to register her with Homeland Security ("Impotently Threatening the Law-Abiding Since 2001!") as my spouse. Form A, I was told, would take up to two years to process, but as soon as it was received, I would be able to send in Form B, which would register her as, um, my spouse.

Still with me? To recap: Send in Form A, get it received and in process, then send in Form B. Once Form B is processed (in about two months, they said), then Shelly can go to the US Consulate in Vancouver and fill out Form C, and receive a K-3 Visa, which will allow her into the US.

So, Form A got received, so I went ahead and sent in Form B. A couple of months later, I get a notice of approval for...Form A? The one that's supposed to take two years? Well, okay. A week later comes the approval for Form B. Now we're talking. Now it's time for them to send Shelly Form C, so she can go get the K-3.

Well, she got Form C. Trouble is, Form C includes Supplemental Forms D, E, and F, mostly information that I already sent in with Forms A and B. In addition she needs a Canadian passport to proceed, which means going to the Canadian government and filling out Le Forme...what's French for G?

Oh, and as you probably figured, each form included copious fees, the amount of which varies depending on which version of the form you look at. I particularly enjoyed when I was making a final inspection of Form B and discovered it had been updated while I was getting ready to send it in, with the requisite fee increase. Oh, and since I was listed in Form E as her US Agent, that meant a surprise bonus fee!

So at this point, Le Forme Grande is turned in and we're just waiting on her passport, so she can turn in Forms D, E and F and get her Visa. It would seem to be going well, except that based on the information we were originally given by Homeland Security ("Defeating Terrorism By Halfassedly Enforcing Non-Existent Anti-Porn Laws!"), we thought she would be here by the end of April. So that's when she gave her notice at work. Meaning that for over a month now she's been unemployed and living in her parents house (we gave up the apartment back in march), and doing more than her fair share of Oma duty.

So be sure to drop by The Enchanted Forest Full Of Chinese People and show some love. And if any of y'all feel like spending, say, a weekend in the land of the still-favorable exchange rate, I know it would be appreciated.


"Oh brother. I don't even know what the FIFA World Cup is. I'm guessing it's soccer, which I hate just as much as any other pro sport. Every editor at Boing Boing detests professional sports, and we would sooner stream a video of a crumpled up paper napkin in the corner of a room than show some jackasses running after a ball. The only time we would ever post anything about pro-sports would be to make fun of them."

This is another reason why I love BoingBoing.