For some reason, this drawing on Cartoon Brew makes me think of Chris. 
There's a common practice here in Vancouver, of spotting local locations used in the trillions of movies and TV shows filmed here, and laughing at what's standing in for what, like the Art Museum being used as Metropolis City Hall on Smallville. In that spirit, I was watching the pilot last night for Grey's Anatomy, an ABC show set at a hospital in Seattle.

Being the pilot, they splurged and shot some location stuff in Seattle, including a scene where a helicopter lands on the roof. The exterior of the building was not shown, but it was in the shadow of the Space Needle, clearly making it the KOMO building at 4th and Denny.

What really made me laugh was that, being on ABC, I'd bet money that some techs down there at KOMO were watching at the same moment, having a good laugh at their station being repurposed as a hospital.

I hear Hawaiians love spotting locations on LOST, as well.


The bastards have followed me to Canada.
Just when I'm legal to work. If I even think about it, kill me.


Think this is the worst thing you'll see today?

Here's a link to All Things Thurl, as if anyone who reads this blog has never been there. 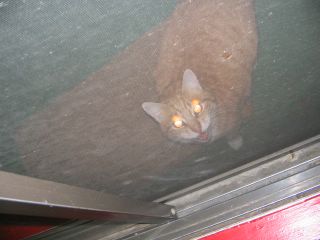 Yes, the little bastard stayed there all night. 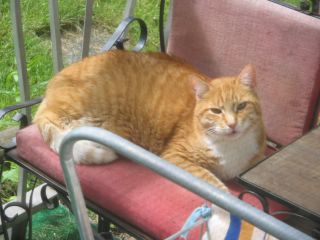 Yes, the little bastard is still there. 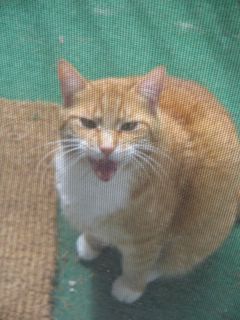 And he's not giving up.


So, Shelswick is off to Whistler, spending what her people call Victoria Day drinking herself to oblivion with her glamorous city friends. Ah, youth. So this morning, after I rolled out of bed (around ten--hey, I get to enjoy the time off my own way), I look out the back door to check the weather, and here's this cat laying on the chair on our patio. 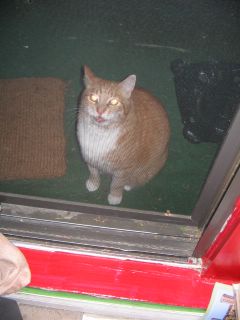 The little cat-bastard comes right to the door, yowling like a busted siren at me through the screen, trying to scratch through it and get inside, since I'm apparently wearing catnip pants or something. I've been watching that cat all day, and he has not strayed more than ten feet from our apartment. 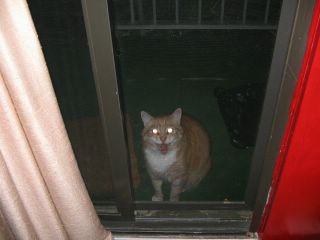 Two things have become clear. One, that there is something in here my orange adversary is after. Two, our feline friend is most definitely insane. 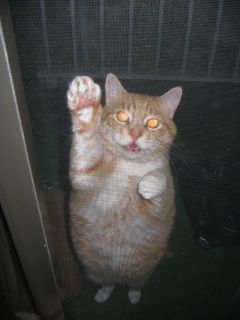 The game is afoot. May you prove a worthy nemesis, you mangy little wannabe-Crookshanks.


You know you want it:

Let me 'splain. A few days ago, the following was posted:

"I watched Episodes IV-VI yesterday and then Episode II and the Episode
III trailer today. I don't think Luke is Anakin's son. Anakin and Luke
don't even look related."

Sadly, this is not the first time some twat has come in with such a ridiculous bit of trollery. At least once a month, it's either that or, "Ewan (or Euan, or Owan, or any other misspelling you can think of) MacGregor doesn't look like Alec Guinness, I don't think Old Ben is the same person as Obi-Wan." Most of the time these zeebs can be safely plonked, but this one...I dunno, I think with the buildup to ROTS, there are even more of them than usual. Something inside me snapped, and I replied with the following:

"Yeah, and why didn't Darth Vader recognize CP30 even though he built him?
And how did Ham make the kesel run in 12 parsecs when a parsec is a unit of
mass? And we don't know that the empire is really evil, since all they did
was blow up a planet, and anyway, the whole movie is stupid because darf
vader isn't supposed to cross his arms like he does in the episode 3
trailer."

In other words, repeating every idiotic "complaint" I could think of, complete with common misspellings. Yes, people do say "darf" and one post did refer to a parsec as a unit of mass. Still, just to make sure people got it, I included, at the end:

Get it? I'm MAKING FUN of trolls, y'see?

Never count on people to get it.

I actually forgot about this message after I posted it. It wasn't until a day later, when I checked my "sent" box, that I was reminded of the message, and decided to go check on the kudos and congratulations I knew would be coming my way.

First was this one:

"Yeah......all-purpose troll is right. Why don't you go back to your
pack-n-play and tell you mom to swaddle you back up so you can take
your nap......"

(note extra-long ellipses. Or "dot-dot-dots" for the less intellectually advanced.)

When it comes to C-3PO, the look in EP II was different from how he
looked in EP IV-VI, he looked less gold colored and more silver/steel
colored. So he may not have thought of it. "

Okay, still doesn't get it, but at least he wasn't abusive. Maybe this'll turn out okay.

(And again with the extra-long ellipses. Seriously, why do people keep going crazy with the "period" key?)

Now, to be fair, a bunch of other users got the joke, and several leapt to my defense. But just like the Onion, I've learned my lesson: never assume that people on the net will use their brains.