So, here at work we've been given the opportunity to create character icons that may or may not be used in an upcoming game. This has been perfect practice in some of the software I'm not really up on yet. Many of my experiments in Adobe Illustrator have been surprisingly successful.

This one, however, was not. This was my first attempt at a self-portrait, because, hey, it'd be cool to see myself on the Box of X... 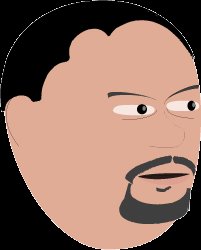 This one, I'm afraid, was just a little too accurate.


...the one thing that many [Nirvana} fans have been asking for and have never received in ANY form...is an action figure

(And people wonder why Kurt did it.)

From Wikipedia:
A fourth season of half-hour episodes was considered, but never materialized. As of 2005, (Peter) Chung has announced plans to work on another Æon Flux project; in an online interview conducted after the release of the film, Chung indicated that it is to be a made-for-DVD animated feature.

Thank ghod; that fucking movie can NOT be the last ever Aeon Flux material.


You ever wonder why so many blues songs start with "I woke up this morning?" I can tell you from experience, it's because when you're in a funk, you know, right from the moment you wake up. I knew it today, as soon as my sleep was interrupted by Adam Carolla's greasy voice spewing from the alarm clock, because I keep forgetting that KNDD runs his show in the mornings, a fact that didn't help my mood one jot.

The fact is, I wake up in a bad mood most days, simply due to the fact that I never feel rested, no matter how long I've slept. Most of the time I can just ignore it, and by the time I finish my shower I'm at least back to neutral.

Days like today, though, I know my psyche is actively plotting against me. I step into the shower, and out of nowhere my subconscious, apropos of nothing, dredges up an incident from, say, three years ago, that pissed me off at the time and was never really resolved. I find myself getting sucked in to my id's little mindgame, replaying the incident until I'm practically screaming arguments at imaginary antagonists in the empty apartment: "Oh yeah, I'M the one being IGNORANT! God forbid you should use your BRAIN, you racist FUCK!" I'm on the verge of calling my sister in Alabama so I can scream at her redneck husband about this three-year-old incident that he probably doesn't even remember, before my rational mind finally gets a toehold and I start taking deep breaths.

This happens even when there's little or nothing to be angry about. No reason to be upset; hell, the day hasn't had a chance to be a good or bad one yet. Just my diseased brain, striking an anger match and throwing fuel on it, just to fuck with me.

This used to happen a lot more often. Especially when I was on prozac, I'd be okay for weeks, then I'd suddenly crash and wake up paralyzed by unwarranted, unfocused anger, which I'd end up taking out on poor unsuspecting Chris (sorry, chief). At least back then, when I worked at the frame hole, there was ample justification for anger, a fact of which my psyche would take full advantage, continually dredging up incidents ranging from that morning all the way back to my teens, so I could spend days at a time in a useless red haze.

Now, though, my life is better in pretty much every way imaginable. And though it doesn't happen as often, I still sometimes get these woke-up-angry-for-no-reason-blues. I can therefore only conclude that my psyche has declared war on me. At least now I have a focus for my rage.


Some Der Maus-related goodness for your weekend:

Re-Imagineering is a blog that's chockablock with good ideas about the parks and the company in general. Lots to think about here, even if there is a bit of "Walt-would-have-wanted" presumptuousness.

And from MiceAge, which you should be visiting regularly anyway, comes a report on some possible updates to the Haunted Mansion. Discuss.


The idea was briefly floated of simply staying in Richmond that night. The city was doing work at the new building, and the power would be off all morning, so no one was coming to help move until 2 in the afternoon. I finally decided, though, that it would be easier to go to bed late, rather than get up early.

So that's how I ended up driving the monstrous truck from Vancouver to Seattle at 1 in the morning, with a killer headache and a dodgy suspension that allowed me to experience every little bump and mmp in the road as intimately as a lover's buttocks. I had nightmares of getting to the border and the DHS clowns deciding to unload EVERY SINGLE THING and leaving me to it. It didn't help that they took the keys to both the ignition and the back. I sat in the office, getting an occasional glimpse as they started it up and drove around, and opened the back. Apparently they were satisfied that I hadn't filled it with a terror cell or ammonium nitrate, and after half an hour they sent me on my way. Good thing they didn't notice the dead babies filled with heroin.

A commercial from the mid-80s stated that moving day is "when you find out who your friends are." I've never been one to question the unfailing wisdom of television, and I can say that if it's true, then I have the best friends a fella can have. Not only did everyone bust it out in less than five hours, they set up the bed and brought me food.

Of course, right now the place is so stuffed with boxes that I seldom leave the bedroom, and there's no phone, cable, or internet connection. But hey, it's a major hurdle cleared, and that means fewer panic attacks, always a good thing. All that's left now is to get my kittykat here, and once that happens there's gonna be one hell of a housewarming party.