I have some bad news.

I love NBC's remake of The Office.

I know, I know, this goes against everything I believe in. As a huge fan of the original, I downloaded the US pilot months ago, just to see how wretched it could be. I never got around to watching the whole thing, though; I watched the first couple of scenes, with the American cast awkwardly reenacting bits from the British pilot, just to confirm what we knew even before Red Dward: It's Just Not The Same.

The series has finally premiered, though, and after the pilot, the episodes are mostly new, with occasional bits pasted in from the original. In this week's episode, the David Brent character (who I know has a different name, but for now we'll just say Brent, Tim, Gareth, etc), played by Steve Carell of the Daily Show, is ordered to host a diversity day after he quotes a Chris Rock routine in the office. In true Brent fashion, he attempts to show how accepting and non-racist he is, which only makes things worse.

Carell, let's be clear, is not Ricky Gervais. But he still reminded me of that guy everyone has worked with (or been, as the case may be), who is determined to be "The Funny Guy" and stays in your face long after the joke ceased to be funny (if it ever was to begin with), the desperation becoming ever more visible, until you're just embarrassed for him and wonder how such a person can function with so little dignity. And frankly, I'm amazed that that's being allowed on American TV, which even now in the 21st century, can't seem to get past the "wackiness ensues/lesson is learned/let's hug" comedy paradigm.

Of course, that's just one episode. It may have been a fluke, or as it goes on it could get further and further from the original appeal of the show until it's unwatchable. And the original has such cachet that I'm really afraid we'll be subjected to an endless parade of inappropriate guest stars. But so far...it doesn't suck. And really, isn't that all we can hope for from network TV?


Some Fark photoshop contests suck. Some are good. Some are great. This one actually makes me glad to be alive.

Sets and the City

So, now that I’ve regained consciousness…

This past weekend was the opening of Guys and Dolls at the Metro Theater. The Metro is one of the few true community theaters in Vancouver, the type of place that has done umpteen productions of Arsenic and Old Lace for its core audience of old bluehairs who can remember when You Can’t Take It With You was a hip satire on contemporary society. It’s the kind of place where aspiring actors can cut their teeth, or at least get their fix.

Shelly’s sister Vanessa has been dancing all her life, and auditioned for Guys and Dolls to try to expand into acting. Surprise, they cast her as one of the dancers at “The Hot Box,” the nightclub where one of the characters sings. She’s been working on it for about three months. My involvement, though, began last Sunday, when I arrived for the load-in of the sets. Since then, it’s been pretty much nonstop until Saturday night.

The sets consist of a series of backdrops that can be brought in and out on a pulley, or “fly” system. That was kinda cool, since I’ve never been involved with a theater that had one. The downside, though, was getting them set up in the first place; one backdrop, used in exactly one scene, consisted of six wooden panels, each one fourteen feet high, that had to be stood up, attached to each other (making sure that they sat flush with each other), and then securely attached to the fly. There are also four “trucks,” that roll across the stage, and can be rotated for different scenes.

After the load-in, the next few nights were spent working out all the scene changes. We were given blueprints for each scene, with a list of each necessary change. As soon as we were given this packet, the guy who made it told us that it was outdated, and would need to be changed, and to ignore it. Then he quit. So we were pretty much left on our own, figuring out what needed to be where, and when, and how to make it happen. I was lucky to be on the stage left crew, working with Greg and Sara. Greg and Sara work for Princess Cruises (the same line I cruised on, back in 1990), running the stage crews for the onboard shows. They’re both on a months vacation from that, and they get roped into this. But hey, they know their shit, and I’m glad to be working with them.

So we spent about three hours working out each scene change, updating our notes and getting it all down. Then the actors came in and ruined it all.

A place like the Metro can’t afford a lot of downtime, so they schedule shows pretty close together. The previous show, Sylvia, ended last weekend, with the strike party on closing night. What this means is that the actors didn’t actually step onto the stage until less than a week before opening night. So you have actors who haven’t worked yet on their own stage, or with any sets, and a crew who still don’t have their set changes down, and a run-through that didn’t get started until after ten at night. That first night we got through act one, and managed act two, scene 1, before midnight came and Gail, the stage manager, sent us home. The next night we got to the final scene of act one. We didn’t get to actually run the second act until Friday night.

That was our preview night. With an audience.

Fortunately, Sara had been having the crew arrive well before the cast, so that by then we had worked act two on our own. And that one’s the bitch, too: at one point, we have to go from the city set to the interior of the Save-A-Soul mission, which means: flying out the city backdrop, striking the city trucks, crossing and rotating the mission trucks, locking them down since the actors have to exit through them, setting up three chairs, a table, a desk, and four benches. All this behind the scrim, with another scene going on downstage. And afterwards, we have to strike it all and reset for the city. And somehow, we pulled it off.

The best part of working at the Metro? Above the lobby is a lounge. With a liquor license. And they serve Guinness. Kinda takes the edge off of the endless notes.

This is the first time I’ve been involved in theater since 1996, IIRC, and the second episode of Twin Peaks Live, at the Seattle Fringe Festival. Naturally, now I’m getting the itch to start hitting auditions again and get back into acting. Fortunately, I have plenty of tapes of my old theater work to remind me of why that’s a bad idea.


Knock knock.
Who's there?
Doctor.
Fuck off, you complete cunt.
Fair enough.


So, one of the disadvantages to being unemployed is that when I'm asked to be in the backstage crew for the play my sister-in-law is in, I don't really have an excuse. So that's how I've ended up as a set changer for Guys And Dolls at the Metro theater. I'll give a full report soon, but right now I'm still knackered from two nights of moving set pieces around, yelling at actors who are standing right where the trucks need to go, and wondering if we're ever going to run act two before we open on saturday. You will bring me the painkillers now.

Rather more disturbing is the Google.se (Sweden?) search for, believe it or not, klaun. I know that the word isn't German, or at least it's not German for "clown," so I'm vexed. Especially since it led me to this.
Copyright 2004 Rich Bowen


I'm sure you've heard that Steven Spielberg is directing an adaptation of War Of The Worlds, starring Tom Cruise, due out June 29. You've probably even seen the trailer. But guess what? That's not the only version.


The best picture ever taken of me. 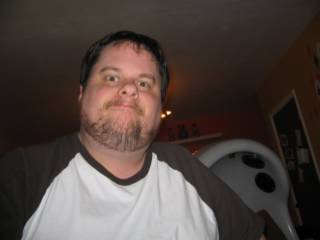 And this is a comedy.

Ideal is a new BBC series about Moz, a small-time drug dealer living in a run-down Manchester flat with his ambitious girlfriend Nicki. I've been downloading the episodes off UKNova.com. At the end of the one I just finished watching, Moz has discovered a severed hand left in his garbage by Cartoonhead, one of his customers, who never appears without a cartoon mouse mask, and who is now dating China, the girl Moz was going to dump Nicki for. Further complicating matters is the fact that Cartoonhead just drank rat poison that Nicki had intended for China.

God, I love the BBC.

Is this a joke?

Please tell me this is a joke.


"O’Sullivan was asked to script the pilot, with specific instructions given that the story would not be set in Sunnydale nor would it include characters from Whedon’s shows...the end result, which carried the working title "Slayer: The Adventures of Buffy Summers," picked up some 90 years in the future with the heroine frozen in time..."


I'm taking a look at the site statistics provided by Bravenet, and as I'd hoped, the two broadcasts of yesterday's radio thingmy attracted a few new visitors to the Klubhaus. The counter shows 13 first-time visitors yesterday, which is 8 more than the average, and a total of 31 page views. So, again, hello to anyone who came by after hearing the show, and I hope you download and enjoy the fillums.

On a related note, I just realized I have a Livejournal account that I'm not using, so I'm thinking of splitting this into two blogs. This one would continue as my personal site, with all the Tacoma-Survivor, Exiled-In-Canada angst you've come to know and love, while the pop culture stuff, the weird fixations on things like Shazam and Flash Gordon, would move to the new site, intended as a more public outlet. Kinda like the Movie Geek Show, but on a blog.

Finally, I just wanna plug some text in here so the site will turn up in more google searches:

That oughta do it. Here's a funny picture.

Am I Famous Yet?

Hello and good morning to anyone who happened to find their way here after hearing me on Making Contact on CFML. Below are direct download links to a couple of the projects I talked about on the show. (Right-click and "save as")

Click here to download the original Das Klaun's Klubhaus short, including the first scene of The Plain And The Powdered. (Quicktime, 5.2mb)

Finally, if you did come here after hearing the interview, sound off! Either email me or post a comment to let me know if anyone actually heard it. I'll post updates on the progress of the new film.

My episode of Making Contact will air THURSDAY at 9:05 AM on CFML. Message ends.


So, the interview didn't air this morning after all. I'll be emailing Jessi to find out why. Sorry for any inconvenience.