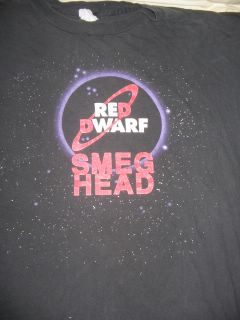 This may have been the first Red Dwarf t-shirt made, and I may have been the first person in Tacoma to have one; there was a store called Shipman's Star Props, owned by two women who went to England a couple of times a year for stuff to bring back and sell. This was the first one they got, and I snapped it up. I was the envy of everyone at Rocky Horror, and everywhere I went, people unfamiliar with Red Dwarf would ask "what's a red dwarf smag head?"

Comments:
So, all the t-shirt images are now showing up. Woo hoo!

I am so jelous.

Hmm...maybe I should post images of the costume I made. It was based on Lister's look from the first two seasons, with a black jacket with RED DWARF embroidered on the back, and a black cap with Lister's tails. I was, of course, the whitest Lister ever, but it went over well at the cons, especially since all you ever saw was people wearing homemade H's on their forehead.