Hey, with how badly I've been neglecting the blog, you know what I've really missed? Five Things. I enjoyed the now-classic Five Things You Need To Know About Doctor Who, and the Five Things You May Not Have Known About Superman allowed me to combine my love of Superman with my love of pedantry. So everybody wins, really.

In the past year I came close a couple times; this year alone, I considered Five Things About Watchmen (including how the characters were based directly on the old Charlton Comics line), as well as Five Things About Red Dwarf. In 2007, I actually made notes toward Five Things About Harry Potter, which you still might see when Half-Blood Prince comes out next month. Stay tuned, true believers!

On a semi-related note, I've occasionally felt a twinge of guilt over my complete disdain (or dislike, antipathy, white-hot contempt, call it what you want) for the show Smallville. I gave it a chance, honestly I did; I downloaded and watched the first three seasons, until it became clear that their version of Superman's mythology was being made up as they went along. I kept checking in occasionally after that, but it never got any better, and the constant repetition of recognizable Vancouver locations just got old.

Oh, they dangled the occasional super-carrot; hey, look, the Flash! Bizarro! You kids love the Martian Manhunter, right? But no matter how long it goes on (nine seasons now, and counting), there's just no polishing this piece of brown Kryptonite. At this point, he's grown up, living in Metropolis, and working at the Daily Planet with Lois Lane and Jimmy Olson, so just fucking put on the tights already. Or just give it up.

So how did I get over the guilt? Easy. Look, Superman is one of the five most recognizable characters in the world, along with, at various times, Mickey Mouse, Sherlock Holmes, Santa Claus, and Darth Vader. He's always going to be around. It's not like DC will stop publishing the character if a movie or TV show flops. This ain't Swamp Thing we're talking about.

In the time Smallville has been on the air, we've had plenty of good Superman in multiple media. There's been Superman Returns, the animated Justice League Unlimited, Superman: Doomsday, and Brainiac Attacks and the current "New Krypton" story arc running through the comics line. So there's plenty of great Superman material out there, without having to sit through another iteration of "watered-down version of classic Superman villain/Clark investigates/villain targets supporting character/Clark rescues supporting character, who gets conveniently wanged on the head and forgets they saw Clark using his superstrength." We just don't need it. 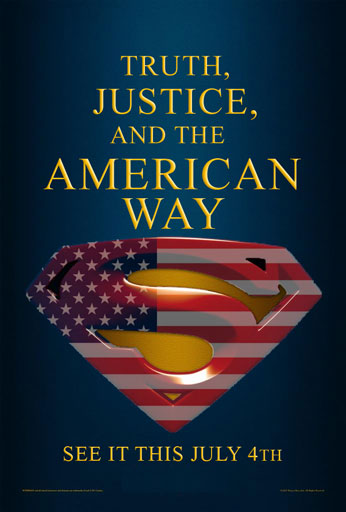 So what do YOU want to know Five Things about?